Reshma Begum had always wanted to rear goats. “Money was always short. My husband is a day labourer and we never had enough to take care of ourselves and our four children,” she says. “We did have some land that we weren’t doing anything with. So I thought, why not rear goats to support the household income. But they all died, and we were left with more debt than before.”

Things turned around when Reshma met a value chain facilitator with IFAD’s PACE project. In 2016, she received training on goat rearing through PACE, along with a loan of US$235 to buy four mother goats.

Within a year, Reshma’s goats birthed 13 calves. In 2017, Reshma turned a tidy US$1300 profit by selling 10 goats, enough to pay for her eldest daughter’s wedding. Now, there are never fewer than 30 goats on her farm.

Reshma’s goat business has been so successful that she’s gained some local fame. Her husband was able to leave his day labourer job and now works alongside her. There’s enough to send the children to school. And Reshma hasn’t stopped dreaming: emboldened by her success, she wants to double the number of goats on her farm. 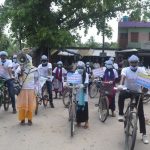 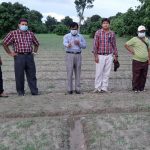 Scientists from the Bogura Spice Research Center Visited WAVE’s Summer Onion Exhibition PlotNews
We use cookies to ensure that we give you the best experience on our website. If you continue to use this site we will assume that you are happy with it.AcceptCookies policy