WAVE Foundation participated in a National Youth Summit organized by the British Council under its PRODIGY Project (Promoting Democratic Inclusion and Governance through Youth) in partnership with leading Civil Society organizations of Bangladesh including Democracy Watch, Shushilan, the Hunger Project and Uttaran on 21 March 2019 at Bangla Academy, Dhaka. Kanbar Hossein-Bor, Deputy British High Commissioner to Bangladesh inaugurated the summit as the chief guest. Mohsin Ali, Executive Director, WAVE Foundation was also present as the special guest.

The National Summit provided youth with a platform to showcase the brilliant work they have done in the communities to increase people’s access to government information and services. Over 500 youth leaders including 100 youth leaders from WAVE Foundation PRODIGY team attended the summit.  Mohsin Ali, the honorable Executive director of WAVE Foundation played a vital role in the first discussion focused on “Role of Youth in Achieving SDG 16: Peace, Justice and Strong Institutions” as the key sector specialist. WAVE Foundation has played the lead role to organize the second discussion titled “Role of Youth in Building Social Harmony”. Along the course of the summit, the participants presented the best 15 Social Action Projects-SAP in a stall-exhibition where 3 SAPs of WAVE Foundation named ‘Creating Education opportunity for Elderly Women at Mohammadpur, Dhaka’, ‘Initiative for an Inclusive Society at Chuadanga Sadar, Chuadanga’ and ‘Living together Peacefully under the Same Sky at Darshona Municipality, Chuadanga’ were showcased there. Youth leaders of WAVE Foundation participated in cultural program and performed a drama named ‘Youth Solidarity in the Struggle of Horizan Community for Living Together Peacefully under the Same Sky’in the summit.

The PRODIGY project aims to increase peaceful and meaningful civic participation in local governance and to create a more inclusive society by promoting accountability, transparency, inclusivity and social cohesion as well as upholding pluralism and valuing differences in perspectives. 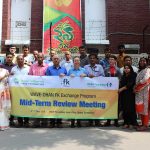 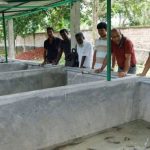 WAVE Indigenous Fish Hatchery InaugurationNews
We use cookies to ensure that we give you the best experience on our website. If you continue to use this site we will assume that you are happy with it.AcceptCookies policy