An exceptional initiative aimed at protecting the biodiversity and dredging of the main river of Chuadanga district, Mathavanga was organized at the Darsana Mathavanga River Point on 1st October, 2019. The event was jointly organized by WAVE Foundation and Parkrishnapur-Madna Union Elderly Committee as part of celebrating the World Elderly Day. At the beginning, chief guest of the event, Mr. S.A.M Zakaria Alam, Chairman, Parkrishnapur-Madna Union said, ‘Mathavanga River plays a key role in the socio-economic-cultural evolution of Chuadanga district. But our insensitivity is taking the river to the verge of death. It has far-reaching negative impact on the agro-biodiversity, economy and overall lives of the people. Effective political and administrative initiatives are urgent for the protection of the river. We may approach to India-Bangladesh River Commission for prompt action.’ The meeting was chaired by the Chairman of Parkrishnapur-Madna Union Elderly Committee. Other notable guests delivered speech in the event were, Mr. Mosharof Kakka, Executive Member, Mr. Muntaz Hossain, General Secretary of Union Awami League, Mr. Saifur Rahman, Coordinator ENRICH Program, Mr. Sazzad Hossain, Program Officer, Elderly People Program. Many people gathered at the newly-built Mathavanga Part with Festoon and Paly-card in support of protecting the river and participated in the Naojatra at the end of the meeting. At the end of the event, Mr. Sazzad Hossain on behalf of WAVE Foundation said, ‘Mathavanga is the life-line of our society, civilization, education and culture. This river is now at the verge of extinction. The objective of this event is to create awareness and take necessary initiative. We hope, government will take necessary action.’ 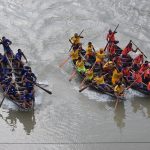 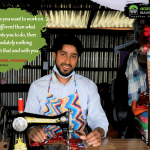 Break The Barrier And Pursue Your Dreams: Empowering Yoth for WorkNews
We use cookies to ensure that we give you the best experience on our website. If you continue to use this site we will assume that you are happy with it.AcceptCookies policy